Great post about being patient… yes fellow authors, this means you!! 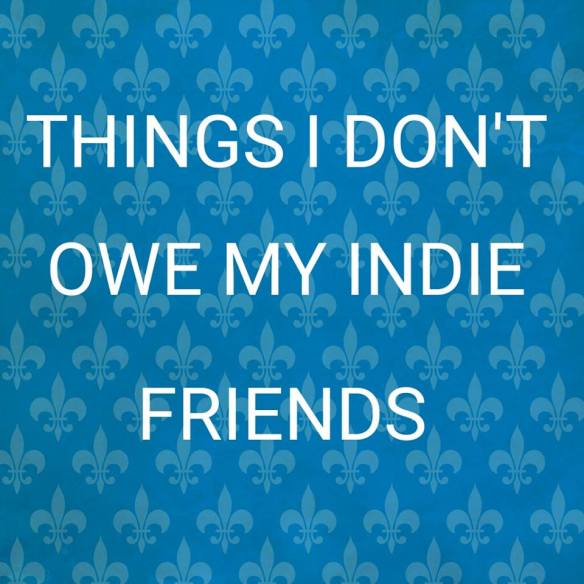 Especially, I love indie art. I love the spirit behind it, and I love the sassiness of artists breaking off the mainstream, staying true to their visions.

I beta read for friends of mine when I’m able.

I buy indie books, and I’ll be straight with you, I do not have a lot of money. If I get money at Christmas, or for my birthday, I spend it supporting my friends who are indie authors.

I take pictures of their books and post them everywhere, on all my social media.

I add their books to my indie book Pinterest boards.

I review their work on various sites and share the reviews.

I don’t have to do these things, and I know. I know. You didn’t ask me to do it in the first place.

And truly, I expect nothing in return…

This Article was written by me and originally published in 2012 ~ I recently “cleaned” up my site and moved items here, this was one of them

I think that many people don’t believe that a Third World War is in the cards, I’m not so sure.  I can tell you that Utopia will never happen.  Why?  Simple, there will always be that one person with brilliance, charisma and agenda, and their agenda is to rule the world.  A super villain.  They don’t just exist in comic books and novels, they are real.  That’s why we writers create them and use them.

I’m watching the news and there are so many people with different ideas about what is right and what is wrong and so many are based on their religious ideologies.   One reason I split most of my colonies into religious based groups is because it seems that’s how most people would choose to follow, their faith.   Not everyone, but most would.  Their church is their community and their home away from home.  I watch Christians who are under attack by non-religious groups, but then I see Christians attacking equal rights for the homosexuals living in the USA.  I see anti-Semitic rhetoric and I see the attacks on peaceful Muslims.

Across the board, a zealot is a zealot and a distortion of your deity’s teachings can create a cataclysm.  Iran’s president, Mahmoud Ahmadinejad, stated in that he would not rest until the West was under one God… he meant his god.  The absolute fascism of dictatorship, deciding for the people what is best for them.  Forcing ones ideologies on others.  We’ve seen this before, twice it led to a World War and in other instances the death of millions, destruction of countries and freedoms that have yet to be re-established.

These people exist right now.  They are in our back yard, in our neighborhoods and in our churches.  They are Muslim, and Christian and Jew and Atheist.  They are everyone who cannot be tolerant of another person’s opinions and beliefs.  We are all different and yet all the same.

Is World War III ready to come?  All the time.  Look around and take notice.  I can’t tell you how it will happen or if it will happen in out lifetime, but the seeds are being sown everyday.  Will it be fought with Sound weapons and Bio warfare?  Maybe… or maybe it will be fought with nuclear weapons, destroying everything.  Maybe it will be fought with guns.  Who knows?  The point is, as long as we are vigilant and strive to be caring and thoughtful and tolerant, we might be able to stop it and until then, we’ll write books where we can teach the people there how to be more tolerant.

For those of you who are unfamiliar with WWI and WWII, please do research and absorb all the information you can.  There is much to be learned, about how it started and the atrocities that occurred.   To quote the SHOAH foundation, Never Forget.  Click here to learn about the SHOAH Foundation