Red Hot Heroes Release Day Blitz!
All gave
some… Some gave all.

So, several of my friends are releasing new books today.
The Red Hot Heroes collection from the Red Hot Authors.
Three of the authors, Magen McMinimy, Rene Folsom and Jodi Redford, will be donating all the proceeds from the sales of their books received until November 15, 2015 to the Wounded Warrior Project. buy a few books and donate to a worthy cause.
This is a cause that is close to my heart, as my Papa and my Dad were both in the Navy. The care and support of our nation’s military is essential, and with the lack of support coming from our government in recent years, the groups like Wounded Warrior Project are so important. So please, take a chance and buy a book for .99¢ and help a worthy program.

You can find all the information below.

Thanks for looking, and to those who buy, thanks for helping.

Find Home in the Heart of our Heroes this Veteran’s Day as
The Red Hots Release Red Hot Heroes!
BROKEN
SURRENDER by LORI KING

One bullet made it physically impossible for
Sarah Bryant to fulfill her dreams of a military career. With her family’s
sympathy suffocating her, she escapes to Stone River, Texas, determined to
rebuild a life and maybe find a new dream.
Silas and Jeremy are two brothers who are as
different as Texas is big. One is an adrenaline fueled former Army medic, the
other is a laid back tow truck business owner. The two things they have in
common? They know they want to live life in a ménage relationship, and Sarah is
the woman for them.
Sarah has too many doubts about herself to
believe she can be enough for one man let alone two. Can these souls find what
they need to grow together, or will they leave more emotional scars to match
their physical ones?

STARTING OVER by MAGEN MCMINIMY

“There was need laced
in every twist and sweep of his talented tongue. A need for something tangible,
something to connect him to the safety of the real world, to the living
breathing life he still held on to. A distraction from the death and sorrow
that carried over from months at war. “ 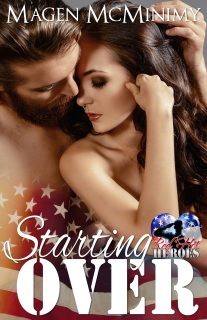 All sales of this title through November 15th, 2015
to benefit the Wounded Warrior Project

After running from the one
man who could have mended her heart, Callie Sullivan has been finding comfort
in her best friend, D. When heartbreaking news about D’s deployed husband,
Adam, makes its way to the states, Callie focuses on helping her friend learn
to survive after tragedy strikes.
Recently returned from Iraq, Luke Merrick learns
about the attack on his former sergeant and best friend, Adam. Knowing D will
need all the support she can get, Merrick finds himself back where he lost the
one woman he thought could be his future.
With D’s heartache fresh and raw, now is hardly
the time for Callie’s past to resurface, bringing new danger to those whom she
wishes to protect and help heal. But life rarely gives Callie what she needs.
This Veteran’s Day, find home in the heart of
our heroes with Starting Over part of the Red Hot Heroes multi-author series
and stands alone for reading enjoyment.

**** PROMISE YOU by RENE FOLSOM

All sales of this title through November
15th, 2015 to benefit the Wounded Warrior Project

Danielle never realized just how much her brother meant to
her until reality slapped her in the face, forcing her to wake up and pay
attention. After a shattering tour overseas, Dylan returned home to live with
Danielle. Knowing he needed more care than his sister could provide, Dylan
invites his battle buddy, Travis, to come live with them.
After a rather unorthodox meeting, sparks begin
to fly between Danielle and Travis. However, both of them know just how
difficult it will be for their relationship to blossom without Dylan’s
blessing, leaving them conflicted about how far they want to take it. Travis
wants nothing more than to earn Dylan’s approval—to promise that he will
cherish her—always.
Once Travis realizes he can no longer keep his
affection for Danielle a secret, things become complicated and the boundaries
between friendship and love cloud his future.
This Veteran’s Day, find home in the heart of
our heroes with Promise You, part of the Red Hot Heroes multi-author series and
stands alone for reading enjoyment.Amazon:http://amzn.to/1Wd9wds

REPORT FOR BOOTY by JODI REDFORD 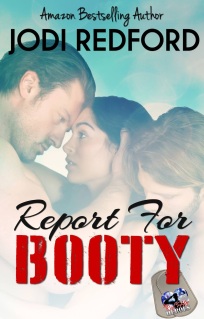 All sales of this title through November
15th, 2015 to benefit the Wounded Warrior Project

Mason Gamble and Nash Vincent are pros at making people
sweat. As former Army Rangers who run the toughest, ball-busting fitness boot
camp in Michigan, they take great pride in that fact. But thanks to the
knockout brunette housesitting next door, suddenly they’re the ones
experiencing excess perspiration. Fortunately, the perfect opportunity to be
neighborly presents itself courtesy of a package delivery snafu.Regan Wallace has trust issues. Specifically,
trusting that her best friend won’t make good on her threat to send a
Strip-O-Gram for Regan’s birthday. Is it any wonder she’d jump to the wrong
conclusion when two gorgeous, camo-garbed hunks land on her front doorstep?
Woops. The crazy part? They don’t seem the least bit scandalized or offended by
her boneheaded blunder. Judging by the sinful heat in their eyes, they’re all
too happy to provide her with a little two-on-one dirty dancing. For a woman
recovering from a bad breakup, fielding the interest of two sex-on-a-stick men
is both surreal and exhilarating. Indulging a three-way fling? Completely out
of her comfort zone. But with her stay limited to a week, some
no-strings-attached sex might be precisely what she needs to get her confidence
back in stride.None of them are prepared for the consequences
of a sexy fling feeling like so much more. As Regan’s stay draws closer to an
end, Mason and Nash realize there’s no way in hell they’re letting the perfect
woman slip through their fingers. And when it comes to fighting for her love,
there are no fitter warriors for the ultimate battle to her heart.

Two people with painful pasts can create something
spectacular with each other.
Jason “Snake” LaRue was a Navy SEAL. Now he’s
not and he has trust issues and memories he can’t forget no matter how hard he
tries. His one solace is a woman who works at the local diner who chases away
the darkness in him. But would she ever consider a man with his past?
Loretta Swann has given up art and now works at
an all-night diner. Running from her past, she up and goes when the mood
strikes. Her one shining moment a day is when the ex-SEAL graces the
establishment. An impulsive kiss makes her wonder about something more with
him. But when she learns what he wants, will she run again, or stick around to
be Snake’s Salvation?

www.aliyah-burke.com ****HER HERO by Miranda Marks

Nate Morrissey has seen all kinds of action in
his years with Marine Special Operations, yet nothing compares to the adventure
he has at home with his new wife—what little time he’s been home in their brief
one year marriage. When he gets called out on a new mission at the beginning of
a long awaited leave, his bride lays down an ultimatum. Unfortunately for them
both, duty wins.
Becca soon realizes she wasn’t meant to be a
military wife. She thought she was strong, but the long months praying and
waiting for his safe return have left her broken. When he leaves her yet again,
she knows it’s time to call it quits, no matter how much her heart tells her to
stay.
Nate isn’t ready to let go of his wife just yet.
The fire they share is too hot to ignore. Nate comes home to an empty bed, but
refuses to let it stay that way long. Till death do us part means something to
Nate and he’s not dead yet…

Amazon: http://amzn.to/1LMZyNf
www.authormirandamarks.comMake Sure to Join our Event On Veteran’s Day!