Synopsis: MAMA’S CHILD follows twenty-three years in the life of Lizzie O’Leary, an idealistic young white woman who travels to the American South as a civil rights worker. She meets, falls in love with, and marries Solomon Jordan, a musician and fellow activist, who is black. Together, the young couple settles in the more liberal San Francisco area and starts a family: daughter Ruby, and son Che. They remain deeply involved in the Black Liberation Movement: participating in protest marches, and living in a home filled with Black Power posters, jazz, protest songs, and visiting Black Panthers.

But by 1978, when the novel opens, there is tension between the couple. Solomon’s music career keeps him away from home too much, and Lizzie is frustrated: “I need you here. I can’t raise these kids by myself. And they need a black parent, some days I just don’t know what to do.” Eventually, the strain becomes unbearable, and they divorce when their children are still young. 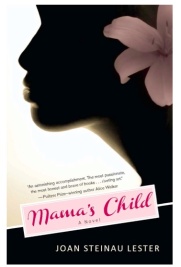 Their divorce deeply affects daughter Ruby, who is already suffering from a confused sense of self—“Am I black or white?” she continually asks herself. “Where do I belong?” She struggles with her own racial identity as well as her anger at her mother for splitting up the family. As for mother Lizzie, despite her attempts at trying to hold on to the emotional cord that binds them, the rift between mother and daughter widens.

It isn’t until Ruby herself becomes a wife and mother that she begins to develop compassion and understanding for the many ways that her own mother’s love transcended race and questions of identity.

Told in chapters alternating between the voices of the mother and daughter, MAMA’S CHILD goes deep into the raw emotions of love, family, and ancestry– from two points of view.

Review: This was a very interesting book for several different reasons.  The author’s life paralleled the book, but only in structure (she herself a white woman who married a black man and had two biracial children, as well as living in Berkley and falling in love with a woman), however, the characters’ themselves are completely fiction.  I also enjoyed seeing the perspectives of both characters, the mother and daughter, (who could be extremely frustrating at times) as they struggle to find out who they are, sometimes painfully.
The author, Joan Stenau Lester, recently mentioned that her reoccurring theme through the book is forgiveness, but I would also add that it is the importance of communication and even responsibility.  The pain that plays out is real and the frustration for me came from the fact that these characters don’t talk to one another.  But that happens everyday in real life, so the flaws these characters have are real.
This is a well written and detailed book, but it is also extremely emotional.  It will elicit emotion from the reader, whether it be joy, encouragement or rage and disappointment.  I was definitely drawn into the story.  I would be only a few years younger than the character of the daughter, Ruby, so it was interesting to see different things through her eyes that I’ve never seen, nor will I ever see.  I also have a biracial niece, so it was interesting to see what the mother in this story was thinking.  Overall, I would recommend this book, I give it 4 stars.  It was definitely thought provoking and heartfelt.